I have to tell you up front that Anne of Green Gables is one of my all-time favorite movies of all time. Don’t bother responding with, “yeah, but Kevin Sullivan didn’t stick close enough to the books.” I am certain I would love the books, but I’ve never had the opportunity. Lucy
Maud Montgomery used her imagination to write these stories and I believe she would approve of Kevin Sullivan’s work. 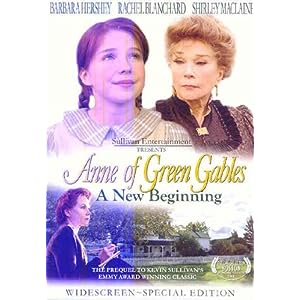 I was fully ready to reject Barbara Hershey in her roll as Anne Shirley in Kevin Sullivan’s latest creation, Anne of Green Gables – A New Beginning. I simply couldn’t imagine her playing Anne Shirley, when all that stuck in my own mind was her role in Beaches, where she played opposite Bette Midler.

Hershey did a fabulous job in her role as Anne and I love the way Sullivan wove the story around in order to fill in many of the blanks viewers were left with in his previous Anne of Green Gables series of films.

I am, however, left with the disturbing feeling that something is amiss, since  in Anne Of Green Gables – The Continuing Story were left with Gill coming home after WWII safe and sound, but Anne of Green Gables – A New Beginning, Gill has died, viewers see his gravestone showing he died in 1945, which would have been during the war. It broke my heart that they wrote Gill out of the story. Clearly this movie upset quite a few fans. One reviewer wrote on Amazon:

When are the producers going to stop trying to shoehorn their own ideas for characters and plot into the Green Gables name. This isn’t a horrible movie but it isn’t Anne of Green Gables. Anne is an orphan that is at the very foundation of who she is as a character. – titled: Blasphemy 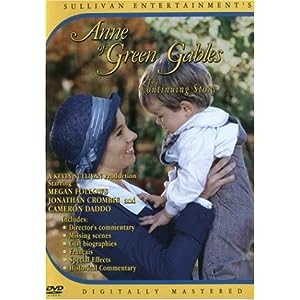 Obviously, this author doesn’t realize that Anne of Green Gables was a series of stories by L.M. Montgomery, not an autobiography. Lucy used her imagination and wrote from her heart. Kevin Sullivan masterfully wove a story together that keeps Anne of Green Gables alive and growing, which I find refreshing.

I loved watching the characters in the original Anne of Green Gables trilogy. I think I would watch anything with Megan Follows and Richard Farnsworth was a fabulous actor. If you enjoy watching Barbara Hershey and Shirley MacLaine, you will enjoy this movie. However, if you are a hard-core fan of the Anne of Green Gables books in their pure form, don’t bother — you will hate it.

I pull out Anne of Green Gables and watch the entire Kevin Sullivan series every couple months. I watch this newest addition right along with the others, without too much trouble with the character switch.